Airbag - A day at the beach (Clear vinyl) 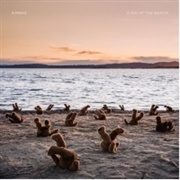 It’s been 4 years, but finally the fifth album from Airbag will be released on Karisma
Records, and it has definitely been worth the wait. “A Day at the Beach” features six new
songs recorded during autumn and winter of 2019-20. Inspired by the resurgence of
1980s electronica, new wave and movie scores, Airbag has created a powerful sound
combining ethereal soundscapes with their signature guitar driven progressive rock. The
result is a stunning selection of songs revealing a mature band looking forward, with an
impressive legacy. Airbag explains: “The album is the result of a strong collaboration
between all three of us. Having lost two original members since our last album, we were
forced to rethink how we write and create new music, but it also allowed us to venture into
something new that turned out to be very inspiring.” Lyrically, “A Day at the Beach” is very
much a story of us and them, told by a husband, father and brother leaving his family
behind into an unknown future. It’s the contrast between the desperate individual
struggling to survive and people in power observing at a safe distance. For the production
of “A Day at the Beach”, Airbag has once again teamed up with long-time collaborator and
engineer Vegard Sleipnes, and it was mastered by Jacob Holm-Lupo. The album is
produced by Asle Tostrup and Bjørn Riis, and, as always, the cover is designed by
vocalist Tostrup. The album, which is their first as a trio, also features talented guest
musicians including Kristian Hultgren (Wobbler).